"Calhoun had always had something of a sixth sense for danger....He'd even been tested for it at Starfleet Academy, and researchers had found nothing in particular. Calhoun's contention was that there was nothing to find because, during the research, no danger was present."
― Star Trek: New Frontier: Martyr

" Sorry, but tone it down a notch, will you? I'm sensitive against opponents who want to kill me. "
― Sung Jin-Woo to Kang Tae-Shik (Solo Leveling)

"Amanogawa, if you keep ignorantly court danger without truly understanding the consequences involved. Even if you have a million lives, it won't be enough for you to survive all of them. "
― Hajime Nagumo (Arifureta Sekai Saikyou)

"Sometimes, you die without even knowing how"
― Jack Neo

The power to detect impending threats. Sub-power of Danger Manipulation. Variation of Intuitive Aptitude and Detection.

The user can sense nearing danger, acute danger, potential immediate danger, or impending danger and sense unwanted or hectic threats to their well-being and evade it. The intuition usually regards themselves but may include their surroundings (like a distant car-wreck, friends or strangers).

Users of Kenbunshoku/Observation Haki (One Piece) can sense the intent of incoming enemies and threats...

When a threat is detected, a sharp sensation gets sent to Izuku Midoriya (My Hero Academia)'s head.

Min Jung-Woo (Terror Man) perceiving danger as the color purple. The deeper the purple, the more dangerous the event that occurs will be.

Nina Drango (v.s. Charioce XVII) during arm wrestling match is blindfolded by herself (She has tied a blindfold on her eyes tightly to avoid transforming a dragon when she sees a handsome guy) because of her danger detection. 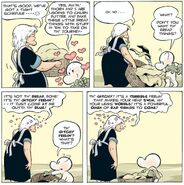 Rose Harvestar/Gran'ma Ben (Bone Comics) getting a touch of the Gitchy feelin! 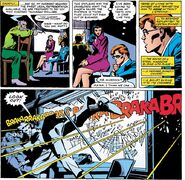 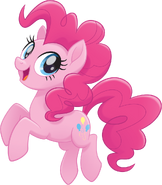 ...and sense a man being mugged across the street.

Due to her Coda training, Zannah/Zealot (Wildstorm/DC Comics) can even sense stealth suited intruders.

Thomas (Maze Runner; Trilogy) sensed a Griever approaching and hid from it...

...was able to hear the incoming WCKD aircraft and hid under a bunker before they could spot him and his friends...

...and dodged incoming gunfire from behind.

Tarquin (Order of the Stick)

Maria Calavera's (RWBY) Semblance, Preflexes, allows her to sense everything better than most people and react to attacks before they happen.