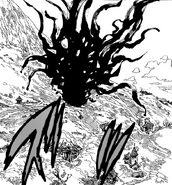 With his Jagan Eye, Hiei (Yu Yu Hakusho) can call the flames from darkest pits of the Spirit World...

Through Dark Regulus, Eclipse Leo (Fairy Tail), is able to use black flames.