When under extreme stress, Arata Kasuga (Trinity Seven) is able to transform into his darker version, Magic King "Astral Trinity". In this form, he posses all the powers of Arata, but with greater terms of power and malice.

Transform into a dark and powerful form.

"But I'm not my "kind", not anymore — your shadow leeches saw to that. I'm half Toa of Light, half Toa of Shadow. This was what you wanted, wasn't it? Toa consumed by darkness, Toa not hampered by things like mercy or morality. Well, now you can choke on it."
― Toa Takanuva, BIONICLE

"Something's... happening to me! Something he did! I... can't... control it!"
― Jak (Jak and Daxter series) feeling the effects of Baron Parix's Dark Warrior Program.

The ability to undergo a transformation into a powerful, and more sinister form. Possible side effect of Darkside View. Opposite to Light Form. Not to be confused with Darkness Mimicry or Darkness Mode.

User can transform into a state of being, mostly due to the influence of dark or negative forces, in which their darkest intentions, emotion, and powers are fully fledged. In this form, the user's powers are greatly enhanced, some being able to manipulate powerful dark forces. However, the user is highly aggressive and quick to anger, making them a threat to anyone around them as well as themselves.

Willow Rosenberg (Buffy the Vampire Slayer) assumes the form of Dark Willow whenever she taps into dark magic.
Add a photo to this gallery 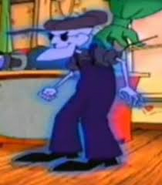 Mr. Nasty (Courage the Cowardly Dog) is the living embodiment of Eustace Bagge's cruelty and nastiness, brought into existence by Benton Tarantella.

Dark Danny (Danny Phantom: The Ultimate Enemy) is the result of Danny Fenton's ghost half fusing with Vlad Masters' evil ghost half, and Vlad's evil nature overwhelming him, transforming him into the evilest ghost on the planet.

After merging with the dark spirit Vaatu, Unalaq (Avatar: The Legend of Korra) became the Dark Avatar, the polar opposite of the Avatar Spirit.

Rex Dangervest (The Lego Movie 2: The Second Part) is the futuristic Dark Emmet. While he was Emmet, he was trapped under the laundry dryer, becoming heartbroken and transforming into Rex (Radical Emmet Xtreme) Dangervest.

After being corrupted by the Equestrian magic she collected, Twilight Sparkle (My Little Pony: Equestria Girls) became Midnight Sparkle, a dark angel-like form obsessed with the understanding of magic.

Feeling rejected after her faithful subjects played in the day but "shunned" the night and slept through it, Princess Luna (My Little Pony: Friendship is Magic) became bitter and jealous. Eventually, her bitterness transformed her into the wicked Mare of the Moon, Nightmare Moon.

Turbo K.O. (OK K.O.! Let's Be Heroes) is the embodiment of the anger and rage K.O. holds within himself. In this form K.O. is faster, stronger, and more powerful than before, and possesses stronger variations of his powers as well additional ones.

Mad Jack (Samurai Jack) is a creation of Aku's magic. Aku saw the anger within Jack and spawned Mad Jack out his own hatred. He is Jack's dark-side and possesses all the skills that Jack does.

Raven (Teen Titans) has a very powerful dark side that is unleashed through great amount of anger and emotion.

After neglecting their Soul Star, the Aeons (Teenage Mutant Ninja Turtles 2012) were corrupted alongside their planet, becoming demonic bat-like versions of themselves.

Bloom (Winx Club) assumed the form of Dark Bloom after being corrupted by Lord Darkar.
Add a photo to this gallery

The Void/Dark Sentry (Marvel Comics) is the Sentry's dark side.

When using the symbiotic Black Suit, Spider-Man (Marvel Comics) gains a boost in all of his powers, but also suffers an increase in aggression and rage.

NegaScott (Scott Pilgrim: Gets It Together) is Scott's alter ego and dark side. He is the manifestation of all of Scott's callousness, spite, faults, and flaws, and rather than accepting them and himself, he runs from them, thus creating Nega Scott's existence.
Add a photo to this gallery

ShineGreymon (Digimon Data Squad) in his Ruin Mode, a corrupted version of his Burst Mode.

Under the influence of the Digimon Emperor's Dark Spiral, Agumon (Digimon Adventure 02) is transformed into a corrupted version of MetalGreymon.

After deliberately subjecting himself to Babidi's Manipulation Sorcery, Vegeta's (Dragon Ball Z) negative emotions and inner evil were brought to the surface, turning him into Majin Vegeta. In this form, Vegeta possesses power great enough to rival that of a Super Saiyan 2.

After feeding on enough evil energy, Orb (Marchen Awakens Romance) was able to obtain his darkest form. The ugliness of his final form represents the darkness inside people's hearts.

Due to her feelings of anger and betrayal after seemingly being abandoned by her human lover, Sara (Mermaid Melody Pichi Pichi Pitch) was corrupted into the Black Mermaid Princess.

After unlocking the seething rage from the very depths of his body, Naofumi Iwatani (Rising of the Shield Hero) can assume his Shield of Anger Form.

Whenever his anger is at its most intense, Sonic the Hedgehog (Sonic X) is able to transform into a darker and angrier form known as Dark Sonic…

…In this form, Sonic experiences a massive increase in speed and strength, allowing him to destroy Metarex robots Gold and Silver in mere seconds. 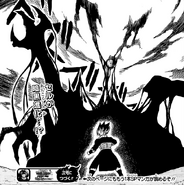 After being bitten by a vampire and partially purified, Django (Boktai) gained the ability to turn into Black Django, a darkness-wielding vampire.

After being corrupted and enslaved by Mundus, Vergil (Devil May Cry series) became the demon Nelo Angelo. In this state, Vergil's abilities are enhanced, allowing him to overpower and nearly kill Dante in their first encounter.

Urizen (Devil May Cry 5) is the demonic half of Vergil made manifest, completely uninhibited by Vergil's human emotions and morality.

Janemba (Dragon Ball Xenoverse 2) in the Supervillain form, a variation of Villainous Mode that shaves off the user's life for power.

Towa (Dragon Ball) in the form of Darkness Towa, a more powerful state of being triggered by her hatred. 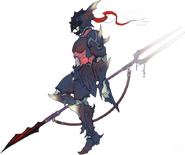 Dark Kain (Final Fantasy IV) is the physical manifestation of the darkness in Kain Highwind's heart.

After being under Dark Eco experimentation for two years, Jak (Jak and Daxter) is able to undergo a dark, aggressive, and very powerful transformation known as Dark Jak whenever he is angered.

After further exposure to Dark Eco, Daxter (Jak and Daxter) gained the power to transform into Dark Daxter.

Dark Pit (Kid Icarus: Uprising) is the physical manifestation of Pit's dark side, created when Pit looked into the Mirror of Truth. 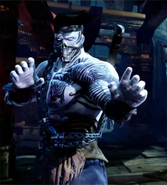 Shadow Jago (Killer Instinct) is the form Jago takes when he succumbs to Gargos' corruption within him.

Riku (Kingdom Hearts) took on the form of Ansem, Seeker of Darkness as a result of being forced to tap into his darkness to defeat Roxas.

Anti-Form Sora (Kingdom Hearts) is the physical representation of the darkness that lurks within his heart.

When at critical health, Sora (Kingdom Hearts) can assume his Rage Form, enveloping his Keyblade in darkness for quick and powerful attacks. 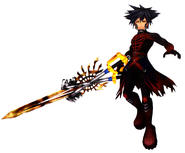 Vanitas (Kingdom Hearts: Birth by Sleep) is the living embodiment of the darkness within Ventus' heart.

After a prolonged stay in the Realm of Darkness, Aqua (Kingdom Hearts III) was corrupted by its influence, becoming Anti-Aqua. 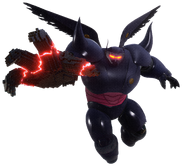 Dark Baymax (Kingdom Hearts III) is Baymax's original body, reconstructed into a Heartless version of his former self.

Dark Meta Knight (Kirby) is the manifestation of Meta Knight's dark side, brought into existence when Meta Knight went to the Mirror World.

After being tainted by Malefor's darkness, Spyro (The Legend of Spyro) gained the power to transform into "Dark Spyro" through great emotional stress. 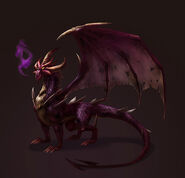 Having fully embraced his darkness, Malefor (The Legend of Spyro) is in a permanent dark form, and unlike Spyro, he has full control over himself.

Dark Link (The Legend of Zelda series) is an evil shadow created by a magical force and is capable of matching Link's every move blow for blow.

Midna (The Legend of Zelda: Twilight Princess) takes on a monstrous dark form by using the completed Fused Shadow. 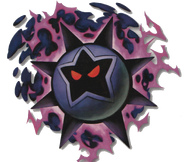 The Dark Star (Mario & Luigi: Bowser's Inside Story) is an evil star composed of and wielding incredible dark powers. 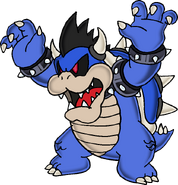 Dark Bowser (Mario & Luigi: Bowser's Inside Story) is the form the Dark Star takes after absorbing Bowser's DNA, wielding both Bowser's power and its own dark powers.

After draining the Dark Star of half of its power, Fawful (Mario & Luigi: Bowser's Inside Story) became Dark Fawful. 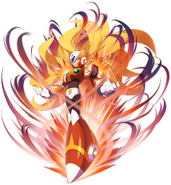 After being exposed to Sigma's Colony Virus, which combined with the Sigma Virus he was already infected with, Zero (Mega Man X) was corrupted into Awakened Zero, reverting to his original malevolent programming.

The Ing (Metroid Prime 2: Echoes) can possess beings such as Space Pirates, corrupting them into more powerful Darklings.

After a failed suicide attack on the Dragon King Onaga, Raiden's (Mortal Kombat) essence was corrupted when his body reformed, causing him to take on the more malevolent and violent form of Dark Raiden.

Morpeko (Pokemon) switches to "Hangry Mode" when it faces hunger for sometime.

Shadow Pokémon (Pokémon) are Pokémon who have been corrupted into a dark form by Cipher, distinguishable by a black aura around their bodies.

Shadow Lugia (Pokémon XD: Gale of Darkness) is intended to be the ultimate Shadow Pokémon, completely impossible to purify.

Shadow Mewtwo (Pokkén Tournament) is a darker form of Mewtwo, the result of Mewtwo being corrupted by the Shadow Synergy Stone.

The Prince (Prince of Persia) developed the ability to transform into the Dark Prince after being infected by the Sands of Time.

Nega-Shantae (Shantae) is Shantae's dark half, brought into existence when Shantae's good magic is converted to dark magic.

Reize Seatlan (Shovel Knight) was transformed into the malevolent Dark Reize after being corrupted by the Enchantress' dark powers.

Dark Reize was transformed into Nightmare Reize (Shovel Knight) after being further corrupted and empowered by the Enchantress to defeat Specter Knight.

Perfect Chaos (Sonic the Hedgehog) is the result of Chaos draining the negative energy of the Chaos Emeralds.

When fueled by thoughts of evil, Shadow the Hedgehog (Sonic the Hedgehog) becomes Dark Shadow, granting him temporary invincibility, access to Chaos Blast, and infinite ammunition for all weapons.

Dark Chao (Sonic the Hedgehog) are malevolent Chao that are the product of being raised by villainous characters.

Dark Gaia (Sonic the Hedgehog) is a manifestation of pure darkness and night who dwells within the planet Earth, awakening in an endless cycle to corrupt and eventually destroy the world with his dark powers. 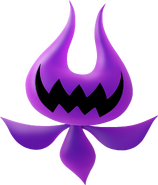 Nega-Wisps (Sonic the Hedgehog) are dark Wisps that have been corrupted into their current form by Eggman draining them of their energy.

Whenever he gives in to the Satsui no Hadou, Ryu (Street Fighter) becomes Evil Ryu.

Oni (Street Fighter) is the form Akuma will take should he allow the Satsui no Hadou to completely consume him.

Whenever Ken (Street Fighter series) is affected by dark or corruptive forces he becomes Violent Ken. In this form, Ken becomes more vicious and ruthless, and can empower his attacks with dark, destructive energy.

In his Evil Saiyan form, Cunber (Super Dragon Ball Heroes) wields overwhelmingly powerful dark ki that not only lets him corrupt others, but fight on par with both a Super Saiyan 4 and Super Saiyan Blue.

Jinpachi Mishima (Tekken) gain a demonic form after being possessed by an evil entity vengful ghost.

Unknown (Tekken) is a demonic form of Jun Kazama.

Dark Alice (Valkyrie Crusade) is the dark form of Alice.

Dark Cinderella (Valkyrie Crusade) is the dark form of Cinderella.
Add a photo to this gallery

After gathering enough negative energy, Fanoxean (The Young Guardians) can transform into a demonic form that possesses extraordinary power.
Add a photo to this gallery 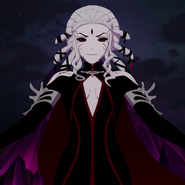 …but was corrupted into a dark Grimm-like entity after jumping into the pools of Grimm in a failed suicide attempt.

Hana (ME!ME!ME!) transforming into Fallen Hana.
Add a photo to this gallery
Retrieved from "https://powerlisting.fandom.com/wiki/Dark_Form?oldid=1692648"
Community content is available under CC-BY-SA unless otherwise noted.