After being under Dark Eco experimentation for two years, Jak (Jak and Daxter) is able to undergo a dark, aggressive, and very powerful transformation known as Dark Jak whenever he is angered.

Transform into a dark and powerful form.

The ability to undergo a transformation into a powerful, and more sinister form. A possible side effect of Darkside View and the opposite power of Light Form. Not to be confused with Shadow Mimicry.

Users of this ability are able to transform into a state of being in which their darkest intentions, emotion, and powers are fully fledged. In this form, the user's power are greatly enhanced and are able to manipulate powerful dark forces. However, in this form, the user is highly aggressive and very quick to anger, making them a threat to anyone around them as well themselves.

Anti Form Sora (Kingdom Hearts) is the physical representation of the darkness that lurks within his heart.
Dark Sonic.jpg
Whenever his anger is at it's most intense, Sonic (Sonic X) is able to transform into a darker and angrier form, known as Dark Sonic.

Mad Jack (Samurai Jack) is a creation of Aku's magic. Aku saw the anger within Jack and spawned Mad Jack out his own hatred. He is Jack's dark-side and possesses all the skills that Jack does.

Dark Danny (Danny Phantom: The Ultimate Enemy) is the result of when Danny's ghost half fused with Vlad's, and Vlad's evil nature overwhelmed him.

Feeling shunned that her faithful subjects played in the day but "shunned" the night and slept through it, Princess Luna (My Little Pony: Friendship is Magic) became bitter and jealous. Eventually, her bitterness transformed her into the wicked Mare of the Moon, Nightmare Moon.

Raven (DC) has a very powerful dark side that is unleashed through great anger.

After being tainted by Malefor's darkness, Spyro (The Legend of Spyro) gained the power to transform into "Dark Spyro" through great emotional stress.

The Prince (Prince of Persia) developed the ability to transform into the Dark Prince after being infected by the Sands of Time.

After further exposure to Dark Eco, Daxter (Jak and Daxter) gained the power to transform into Dark Daxter.

Unknown (Tekken) is a demonic form of Jun Kazama.

After gathering enough negative energy, Fanoxean (The Young Guardians) can transform into a demonic form that possesses extraordinary power.

Whenever he gives in to the Satsui no Hadou, Ryu (Street Fighter) becomes Evil Ryu. 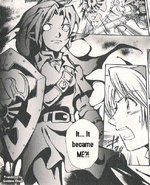 Dark Link (Legend of Zelda series) is an evil shadow created by a magical force and is capable of matching Link's every move blow for blow.

Bloom (Winx Club) assumed the form of Dark Bloom after being corrupted by Lord Darkar.

Willow Rosenberg (Buffy the Vampire Slayer) assumes the form of Dark Willow whenever she taps into dark magic.

Dark Pit (Kid Icarus: Uprising) is the physical manifestation of Pit's dark side, created when Pit looked into the Mirror of Truth.

Darwin transform into his evil form in order to stop Gumball and Clayton from glaring at each other. His face becomes quite humanlike.
Add a photo to this gallery
Retrieved from "https://powerlisting.fandom.com/wiki/Dark_Form?oldid=502597"
Community content is available under CC-BY-SA unless otherwise noted.