Due to hundreds of years worth of evil deeds, Mr. Gold/Rumpelstiltskin (Once Upon a Time) suffers from a heart clouded by darkness, his heart being consumed by it until there was nothing left but the darkness. 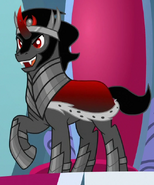 King Sombra (My Little Pony: Friendship is Magic) was the tyrannical ruler of the Crystal Empire "whose heart was black as night."

Darth Sidious (Star Wars) was one of the greatest, most powerful, and most evil Sith Lords to have ever lived. His sheer inner evil disturbed even other Sith Lords, and surpassed even the embodiment of the Dark Side itself.
Add a photo to this gallery
Retrieved from "https://powerlisting.fandom.com/wiki/Dark_Heart?oldid=1557863"
Community content is available under CC-BY-SA unless otherwise noted.