Nightmare Moon (My Little Pony: Friendship Is Magic) has the power to manipulate the position of the moon and become empowered with dark magic.

"All hail the dark lord of the twin moons!"
― Marge Simpson (The Simpsons)

The power to manipulate the dark/destructive aspects of the moon/moon energy. Combination of Lunar Manipulation and Negative Forces Manipulation. Opposite to Pure Moon Manipulation.

User can create, shape and manipulate lunar energy/matter of a darker, detrimental nature; that which damages, destroys, and consumes anything/everything they come across, representing the hazardous destructive side of the moon, which in turn ignores most of the limitations and weaknesses of its normal elemental variant. In essence, this is about solely controlling the negative powers of the moon. 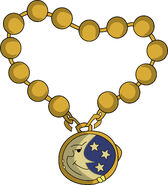 Lunar Locket (Xiaolin Showdown)
Add a photo to this gallery
Retrieved from "https://powerlisting.fandom.com/wiki/Dark_Moon_Manipulation?oldid=1636822"
Community content is available under CC-BY-SA unless otherwise noted.