Manipulate the aspects of the Dark Side.

"There's a reason why anger, fear, and hatred are paths to the Dark Side: they all spring from a single source - the same source as a certain flavor of love. A dangerously sweet, addictive flavor."
― Matthew Stover

"Peace is a lie. There is only Passion. Through Passion, I gain Strength. Through Strength, I gain Power. Through Power, I gain Victory. Through Victory my chains are Broken. The Force shall free me. "
― The Sith Code.

The Dark Side Aspects are the archetype of dark, malevolent, negative forces that makes ups one side of things in existence. The dark side may also empower the users with aspects of raw emotions. The dark side can enhance certain powers which may lead to a dark nature. 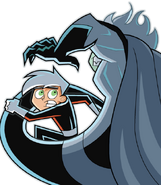 After being forced to undergo the Dark Warrior Program for two years, Jak (Jak and Daxter) gained power over Dark Eco.

Dark Spyro (The Legend of Spyro) controls Dark Aether in contrast to his light form.

Eobard Thawne (Arrowverse/Flash) possesses a corrupted connection to the Speed Force, the Negative Speed Force, representing itself as red lightning.

Negative Supergirl (DC Comics) is the negative and darker aspect of Supergirl's psyche given form by Black Kryptonite.

Blackheart (Marvel Comics) is the accumulated of evil born from centuries of murder in the small town of Christ's Crown, New York given form by Mephisto.

Nega Scott (Scott Pilgrim: Gets it Together)
Community content is available under CC-BY-SA unless otherwise noted.
Advertisement