Nyx/Nox (Greco-Roman Mythology) Personification and Goddess of the Night, Darkness, the Night Skies, the Veil, Fertility and Prophecy

To have the physical traits and abilities of a Night Deity.

User with this ability either is or can transform into a Darkness Deity, a god/goddess who represents or is associated with the Night and Darkness. Darkness and Night Deities can be found throughout most of recorded history in various forms. 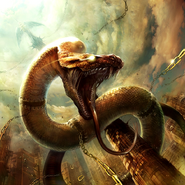 Hades (Saint Seiya)
Add a photo to this gallery
Retrieved from "https://powerlisting.fandom.com/wiki/Darkness_Deity_Physiology?oldid=1713550"
Community content is available under CC-BY-SA unless otherwise noted.