The power to bind, imprison or otherwise stop objects by using darkness. Sub-power of Umbrakinetic Constructs. Variation of Elemental Imprisonment.

The user can bind, imprison and/or otherwise stop object/being by surrounding them completely by using darkness.

Merascylla (Nanatsu no Taizai) can trap her victims in a wrapping of her darkness-like cloak.

Makora (Samurai Deeper Kyo) using Kage Ochi that drags the victim into the shadow dimension for eternity, with nothing but darkness until death.

Zaruchim and Raushin's (Zatch Bell!) spell Orushido Sharon immobilizes their opponents with their own shadows so they can hit them with their next spell. 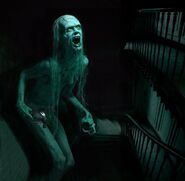 Father Owen once explained that the angels that once fell where imprisoned in darkness by God, which is the reason why Tristana Medeiros (Rec 2) was unable to be found in the light...

... so in order for the demonic parasite to escape it needed a new host like Ángela Vidal for it to roam the earth freely.
Add a photo to this gallery
Retrieved from "https://powerlisting.fandom.com/wiki/Darkness_Imprisonment?oldid=1316644"
Community content is available under CC-BY-SA unless otherwise noted.