"The shadows betray you, because they already belong to me!"
― Bane (The Dark Knight Rises)

"But once again you have it all wrong, Eraqus. Darkness is a beginning, you see, not an end. At birth, every one of us emerges from darkness into a world of light, do we not?"
― Master Xehanort (Kingdom Hearts Birth By Sleep)

The power to manipulate darkness/shadows. Opposite to Light Manipulation.

User can create, shape and manipulate darkness and shadows. By itself, darkness is mostly used to cloud everything into total darkness, but by accessing a dimension of dark energy it can be channeled to a variety of effects, both as an absence of light and a solid substance: one can also control and manipulate the beings that exist there, create and dispel shields and areas of total darkness, create constructs and weapons, teleport one's self through massive distances via shadows, etc. 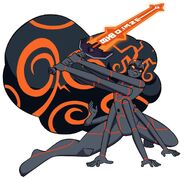 Todd Rice/Obsidian (DC Comics) can manipulate shadows and darkness to his will.

Jackie Estacado (Top Cow/Image Comics) wearing The Darkness as armor.
Add a photo to this gallery 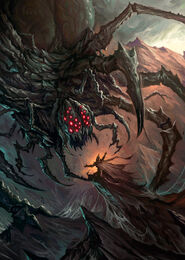 Ungoliant (Tolkien) the Gloomweaver.
Add a photo to this gallery

|Mirajane (Fairy Tail) is a powerful user of this ability.

Shikamaru Nara (Naruto) uses the Shadow Sewing Technique to bind his opponents with materialized shadows.
Moria.jpg
Gekko Moriah (One Piece) can manipulate shadows (including his own) in a variety of ways via the Kage Kage no Mi.

Having eaten the Yami Yami no Mi, Marshall D. Teach/Blackbeard (One Piece) can control darkness, giving to control gravity, create pocket dimensions, nullify one's power, and absorb the area around him.

Makora's (Samurai Deeper Kyo) Shadow Techniques are manipulating dimensional energy to create pockets of space for a variety of feats.
Add a photo to this gallery

... and to create some kind of black hole.
Add a photo to this gallery

Dark Gaia (Sonic the Hedgehog) is the incarnation of darkness, night and destruction. As such, it possesses power over darkness and dark energy on a global scale, able to create an army of supernatural monsters and cover the world in darkness.

Mephiles the Dark (Sonic the Hedgehog) is the malevolent conscience, mind, and will of the sun god Solaris. Being composed of living dark power, he is able absorb anyone's shadow's, use darkness create an army of clones and manipulate the area around him, and control dark energy forces.

Zor (Sonic the Hedgehog) is a Zeti that control dark forbidden powers, able to cover an area in darkness and create minions and clones of shadows.

Aragami (Aragami) can manipulate shadows for a plethora of purposes.
Add a photo to this gallery

Chirox (BIONICLE) creating a giant fist out of shadow energy.
Stygian Full Body.png
Stygian/Pony of Shadows (My Little Pony: Friendship is Magic) is known for this power. 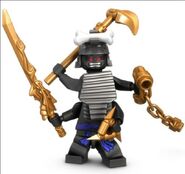 Lord Garmadon (Lego Ninjago), Lord of the Underworld and Darkness. 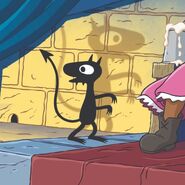 As a demon, Luci (Disenchantment) can manipulate shadows and even make out with someone else's shadow.
Add a photo to this gallery