Brainiac 5 (DC Comics) upon assimilating the information of Brainiac 1 and his home planet, could convert entire worlds into data.

The ability to transform matter into data. Sub-power of Transmutation. Technique of Data Manipulation. Opposite to Digital Materialization.

The user can convert matter and energy into data, values of qualitative or quantitative variables. They are able to convert entire landscapes of matter into nothing but ones and zeroes to be archived and stored in certain technological spaces or convert living beings into data, essentially rendering them both alive and dead in a technological sense. 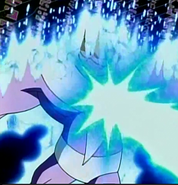 Validus (DC Comics) being converted into data by Brainiac 5.