The power to obtain datakinetic powers through objects. Variation of Powers Via Object and Techno Object.

The user has access to an object that grants them datakinetic powers. Whether it is some type of substance, device or artifact, the wielder is capable of attaining powerful abilities related to data or even enhancements to preexisting abilities.

The object could be some form of specialized technology. In some cases, it could be a form of Digital Symbiosis. The object could also be of magical, spiritual and/or biological origins. However it is or wherever it comes from, the usage of the item enables its holder the ability to control data/digital energy. They will be capable of generating files/programs/viruses, interacting with computers, creating digital constructs or even converting matter into data code. 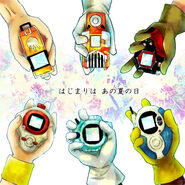 Digivices (Digimon) are used to alter and/or enhance parter Digimon.

The Digitizer (Phineas and Ferb) can transform objects/people into data and transport them into a video game.

Limb Enhancers (Steven Universe) can create computerized interfaces for Peridot.
Add a photo to this gallery
Retrieved from "https://powerlisting.fandom.com/wiki/Data_Object?oldid=1512642"
Community content is available under CC-BY-SA unless otherwise noted.