Death (Supernatural) is the personification of death

Become the embodiment of Death

The power to become the embodiment of death. Variation of Power Manifestation and Death-Force Manipulation. Opposite to Life Embodiment.

The user of this power can become the embodiment of death itself. This means that they can easily kill others, reap their souls when they die and take their souls to the afterlife. They could also bring about the apocalypse, causing deaths by the millions, possibly even billions. They can decide where a soul will go after death.

The Grim Reaper is the personification of Death 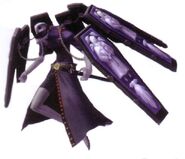 The true form of Death (Persona 3).

Death (Final Destination)
Add a photo to this gallery
Retrieved from "https://powerlisting.fandom.com/wiki/Death_Embodiment?oldid=723478"
Community content is available under CC-BY-SA unless otherwise noted.