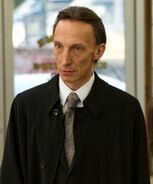 SCP-2935 - O' Death, (SCP Foundation) can project a field of death over an entire plane of existence.
Community content is available under CC-BY-SA unless otherwise noted.
Advertisement