Use magic that brings death to living things.

The power to use magic that brings death to living things. Form of Magic. Variation of Death-Force Manipulation. Opposite to Life Magic. Not to be confused with Necromancy.

The users of this power can utilize powerful spells which can cause any living thing to die, either instantly or eventually.

Nekron (DC Comics) is a master of death-based magic, to the point of inducing the undead apocalypse known as the Blackest Night.

A Magister of the Amethyst Order (Warhammer Fantasy), practicing the arts of the Purple Wind of Magic, Shyish, also known as the Wind of Death.

Vandalieu (The Death Mage Who Doesn’t Want a Fourth Time) is one of the few users of Death-attribute magic. 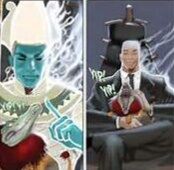 Julius Kane (Kane Chronicles) is the permanent host of Osiris the god of underworld make things rot and disintegrate just by touching them.
Add a photo to this gallery
Retrieved from "https://powerlisting.fandom.com/wiki/Death_Magic?oldid=1533589"
Community content is available under CC-BY-SA unless otherwise noted.