"I felt a great disturbance in the Force… as if millions of voices suddenly cried out in terror and were suddenly silenced."
― Obi-Wan Kenobi (Star Wars)

The power to sense the coming of death and the actual act of dying. Technique of Death-Force Manipulation. Variation of Precognition. Opposite to Life Perception.

The user can sense the coming of death, determining when someone is dead or dying or if others have died in a specific location. This may extend to seeing the names and lifespans of those whose faces the user sees.

A Shinigami (Death Note) can simply look at the face of a target and see the name and remaining lifespan of the said human. 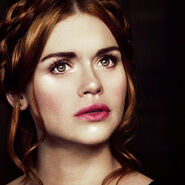 As a Banshee, Lydia Martin (Teen Wolf), is a harbinger of death and has auditory and visual premonitions of deaths involving supernatural creatures.

Jordan Parrish (Teen Wolf) as a hellhound, is able to sense and locate dead supernatural beings. 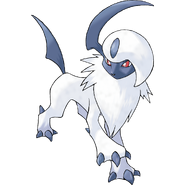 Befitting its name as the "Disaster Pokémon", Absol (Pokémon) is able to sense when a tragedy such as death is about to occur.

Scolippi's Stand, Rolling Stones (JoJo's Bizarre Adventure Part V Golden Wind/Vento Aureo) shapes into someone who is destined to die soon and begins tracking them down.

Thanatos (Valkyrie Crusade) as the goddess of death, can perceive death on all things.

Shiki Ryougi (TYPE-MOON) can perceive the "lines and points of death" around all things. 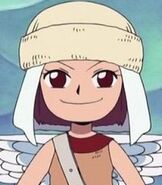 Aisa's (One Piece) Mantra or Kenbunshoku/Observation Haki unwillingly give her the abiliy to sense whenever a person would die.

Mahitotsuhime/Levi Kazama (Trinity Seven) left eye known as "Eye of the God of Calamity" or "Divine Disaster Eye" allows her to sense the deaths of others...

...and see the upcoming death of everything including objects.

Ryuki Kashin (Trinity Seven) acquired the abilities of Mahitotsuhime's left eye, which she took along with her when she died, to "see" and sense the deaths of others.

Nico di Angelo (Percy Jackson and the Olympians/The Heroes of Olympus)
Português do Brasil
Community content is available under CC-BY-SA unless otherwise noted.