As the combined personifications of the Logos World and the World of Truth, Aquarion Logos Genesis (Aquarion Logos) embodies the definitions of anything and everything.

The power to become the embodiment of definitions/meanings. Variation of Definition Manipulation and Power Manifestation.

User becomes the embodiment or personification of definitions, the fundamental nature and identity that makes up anything/everything, granting them limitless or near-limitless power over all definitions/meanings. 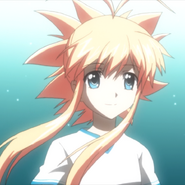 The Law of Identity (Demon King Daimao) personifies the definitions of everything by her very nature, as without an identity nothing can truly exist or have meaning.
Add a photo to this gallery
Retrieved from "https://powerlisting.fandom.com/wiki/Definition_Embodiment?oldid=882749"
Community content is available under CC-BY-SA unless otherwise noted.