God (Image Comics) despite being the creator/fashioner of the Earth, is still in servitude to his creator, The Mother of Existence.

Use the traits of Demiurge

Power to use the abilities of a Demiurge. Variation of Transcendent Physiology.

User with this ability either is or can transform into a Demiurge, an artisan-like being responsible for the fashioning, shaping and maintenance of the physical universe, or at least some portion of it. It may clear things to know that in Greek dēmiourgos means literally "public worker", and was originally a common noun meaning "craftsman" or "artisan", but gradually it came to mean "producer" and eventually "creator" or "maker". Depending on the system, they may be considered to be either uncreated and eternal, or considered to be the product of some other Supreme Entity.

According to the Platonic and Gnostic philosophical teachings, the Demiurge is a supernatural being imagined as creating or fashioning the world in subordination to the Supreme Being, and sometimes regarded as the originator of evil or good. This being is regarded as the creator of the world, but inferior to the Supreme Deity, who is the creator of the universe itself and the Demiurge. The Demiurge is also incapable of creating perfect world forms, and all of their planetary creations are flawed as a result.

The Elder God (Legacy of Kain) possesses traits in common with the Demiurge, regarded as the Engine of Life and hub of the Wheel of Fate within Nosgoth.

According to Sarkic mythology, Yaldabaoth (SCP Foundation) is the primordial creator of all life in the multiverse, having fed upon countless gods and "exhaled life". 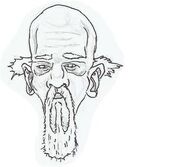 Creator (The Discworld) created the Discworld while the main universe was being built, and obviously on a budget. It is clear that World Creation is purely a mechanical function and doesn't call for godlike attributes.
Add a photo to this gallery
Retrieved from "https://powerlisting.fandom.com/wiki/Demiurge_Physiology?oldid=1323775"
Community content is available under CC-BY-SA unless otherwise noted.