As Greater Daemons of the Chaos God of Sorcery, the Lords of Change (Warhammer 40000) are the most powerful masters of the mystical arts after Tzeentch himself.

Use the traits of demons sorcerer.
The power to use the abilities of demon sorcerer. Variation of Demon Physiology. Opposite to Angelic Sorcerer Physiology.

User with this ability either is or can transform into a demon sorcerer, being able to enter the paths to many other abilities that are desired by any power hungry users, mostly the Dark Arts and various demonic powers. 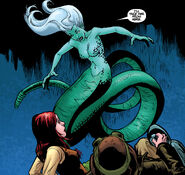 Originally a human sorcerer, Rudiger Rosenkreuz (Highschool DxD) became more powerful after he was reincarnated as a Devil Bishop.

Ravel Phenex (Highschool DxD) is a High Class Devil whose magic powers are further enhanced by a Bishop Evil Piece.

Grayfia Lucifuge (Highschool DxD) is one of the most powerful Devil Sorceress in the Underworld due to the Queen Piece enhancing her already formidable magic abilities.

Illyana Rasputina/Magik (Marvel) as Darkchylde.
Add a photo to this gallery
Retrieved from "https://powerlisting.fandom.com/wiki/Demon_Sorcerer_Physiology?oldid=1394414"
Community content is available under CC-BY-SA unless otherwise noted.