Fuu (Dragon Ball Heroes), thanks to becoming the Dark King is a Demonic God.

Use the traits of a divine-demon.

Divine-Demonic Entities have all the strengths and powers of both gods and devils but almost none of the weaknesses, they can use both holy and demonic powers equally with no restrictions. Their appearances can vary greatly, such as having a combination of traits of both demon and god, one with traits from neither, or even a unique appearance that doesn't fit either classification.

Despite both races being divine/holy, they should not be confused with the Nephalem, which are the offspring of angels and demons.

Benares (3x3 Eyes) is known as the Divine or Holy Demon, as he is a god that fused together with countless demons and other demonic beings to become one of the most powerful beings in existence.

Omne (Bayonetta 2) is the fusion of Jubileus the Creator, creator god of the universe, and Queen Sheba, ruler of Inferno, essentially making her a god-demon hybrid.

Glorificus (Buffy the Vampire Slayer) is a powerful demonic god from a hell dimension.

Whistler (Buffy the Vampire Slayer) is the child of a demon and a higher being...

...and thus able to assume a demonic form.

Infernals (Forgotten Realms) are the unnatural offspring of gods and demons/devils.

Tanarotte (Magicians Academy) is a hybrid of god and demon. 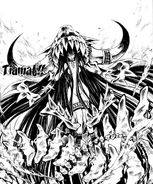 The Guardian ÄRM, Tiamat (Marchen Awakens Romance) takes the form of the demonized mother goddess of the sea.

Joker (Valkyrie Crusade) can be either a goddess or a demon.

Oninomiko (Valkyrie Crusade) is a demon that possesses divine powers due to being an shrine maiden.

Chaos (Final Fantasy VII Franchise) is a powerful, primordial demonic entity serving as a "Weapon" of the Planet. Despite his dark and destructive powers, under his host's control (Vincent), he serves for the side of good.
Community content is available under CC-BY-SA unless otherwise noted.
Advertisement