The Fel Reavers (World of Warcraft) are enormous and powerful demonic machines used by the Burning Legion as sentinels.

Use the traits of machine with demonic powers.

The users with this ability can either transform into a mechanical being with demonic powers, which is far more extraordinary than ordinary machines. This could be due to the machine coming from demonic origins or a machine becoming influenced by a source of demonic power. This makes the machine a mighty figure, possessing incredible powers of destruction that allow them to level an entire area and overwhelm their foes.

The Umbran Armor (Bayonetta 2) is a demonic mech used by the Umbra Witches in their angel hunts.

Adam (Buffy the Vampire Slayer) is the end result of a military super-soldier program meant to combine the advancement of technology with the intelligence and adaptability of humans and the superior strength and emotional detachment of demons.

After being transferred into the Internet, Moloch the Corrupter (Buffy the Vampire Slayer) eventually transferred himself into a robotic body.

Created by Satan's army, the Golgoth Guards (Castlevania: Lords of Shadow 2) are described as the missing link between man and machine; even Dracula himself is no match for them in a straight-up fight.

Nero (Devil May Cry) is a quarter-demon descendant of Sparda, who replaced his Devil Bringer arm with a technomagical cybernetic prosthetic. 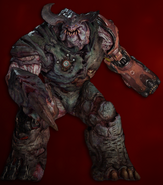 The Cyberdemon (DOOM series) is the result of combining advanced technology with the body of a Baalgar Demon. 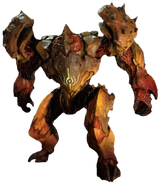 The Hell Guards (Doom 2016) are demonic sets of armor fueled by a demonic parasite within said armor.

The Ultra-robots (Samurai Jack) were 8 robotic assassins, each designed with a unique weapon. With nearly indestructible metallic armor and powered by the essence of Aku, they were able to defeat and nearly kill Jack.

Dhalochars, a.k.a. Endbringer Devils (Starfinder), are vessels and engines of ruin at the same time as being devils themselves, both diabolic entities and vessels simultaneously that can traverse space.

An Endbringer Devil (Starfinder) in its spaceship form.

Calamity Ganon (The Legend of Zelda: Breath of the Wild) is an amalgamation of Malice and corrupted Sheikah technology. 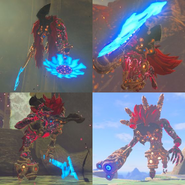 The Scourges of the Divine Beasts (The Legend of Zelda: Breath of the Wild) are demonic cyborgs created by Calamity Ganon.

Gatasubal (Yu Yu Hakusho) is a cyborg demon that is composed entirely of a hybrid metal of combined steel and living cells.

Heck Machine (Screaming Soup!) is a robot built by the forces of Hell to combat angels and now acts as the gatekeeper to Hell.