Sadao Maou (The Devil is a Part-Timer!) using demonic magic to drastically increase the force of a punch.

The ability to use demonic magic or sorcery. Form of Magic. Variation of Mythic Magic. Combination of Magic and Demonic Force Manipulation. Opposite to Angelic Magic.

The user is capable of using demonic magic to achieve several feats such as creating, destroying and reconstructing anything, sometimes even to warp reality. This type of magic is usually used by a dark and evil entity or those related to them.

Sabrina Spellman (Chilling Adventures of Sabrina) gained a darker and more powerful form of magic after signing her name and pledging eternal servitude to the dark lord Satan...

... as result of her new found magic she gained the power to summon and control fire from the pits of hell.

Trigon (DC Comics) is a malevolent being who lives up to the demonic arts of magic...

... as a demonstration he prepares to cast a evil spell.

In addition to the Power of Destruction, Sirzechs Lucifer (Highschool DxD) is master of demonic magic.

Ajuka Beelzebub (Highschool DxD) is a genius in demonic magic.

Shendu (Jackie Chan Adventures), one of the Demon Sorcerers 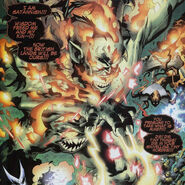 The Blade of the Archfiend (Ninja Gaiden) was forged from a meteorite infused with the demonic magic of Vazdah, making it as powerful as the True Dragon Sword.

Mephistopheles (Valkyrie Crusade)
Add a photo to this gallery
Retrieved from "https://powerlisting.fandom.com/wiki/Demonic_Magic?oldid=1356350"
Community content is available under CC-BY-SA unless otherwise noted.