Vergil (Devil May Cry 3: Dante's Awakening) wields his powerful trade-marked sword, the Yamato, once wielded by his father, The Dark Knight Sparda.

Users are able to create any kind of weaponry that is imbued with incredible demonic power, wield them as their own, and make it so that no one is capable of using the weapons except for those who are worthy of its power. The exact power the weapon possesses highly varies on the type of demonic force it is powered by, it can be either be capable of small yet effective feats or posses power that is capable of controlling vast of forces of the demonic plane.

Dante (Devil May Cry) wields the Rebellion, a magical sword that was given to him by his father, The Dark Knight Sparda, and which serves as a physical manifestation of his power.
Nero DMC4.jpg
Despite having no connection to Sparda, Nero (Devil May Cry 4) is able to wield his weapon, the katana Yamato. 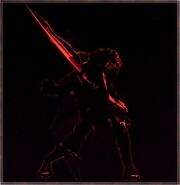 The Dark Knight Sparda (Devil May Cry) is a legendary demon who slew the demonic emperor Mundus 2000 years ago. He once wielded the weapon named after him, an indestructible sword imbued with his own demonic power.

Demise (Legend of Zelda: Skyward Sword) carries a powerful sword that is actually the true form of his underling, Ghirahim. The sword rivals that of Link's Master Sword in both magic and appearance.

Scanty and Kneesocks (Panty and Stocking with Gaterbelt) wield demonic weapons that are formed from the respective garments, Double Gold Lacytanga and Double Gold Spandex. The weapons are capable of strengthening a demon's power as well as go up against Panty and Stocking's Backlace and Stripe I and II.

Doku (Ninja Gaiden) is a powerful lord of the Great Fiends of Vigoor Empire who once wielded the Dark Dragon Blade, a weapon that was carved from the bones of the Dark Dragon.

Genshin (Ninja Gaiden) is a powerful and ruthless ruler of the Black Spider Clan who possesses the Blade of the Archfiend, a weapon that possesses the magic of the Arch Fiend, Vazadah, that is as powerful as Ryu Hayabusa's Dragon Sword.

Inuyasha (InuYasha) wields the Tessaiga, a powerful blade that was created from the fang of his father, Inu no Taisho. Its greatest strength is its ability to slay 100 demons in a single sweep.

Nightmare (Soul series) carries Soul Edge, a powerful demonic weapon that is well known for stealing the souls of anyone unfortunate to be at the end of its blade.
Add a photo to this gallery
Retrieved from "https://powerlisting.fandom.com/wiki/Demonic_Weaponry?oldid=329424"
Community content is available under CC-BY-SA unless otherwise noted.