The mutative power in which one develops Armor-like skin. Also known as Impenetrable Skin or Natural Armor. The ability is a sub-form Density Manipulation.

The users skin, or "Derma" becomes resistant to attack harm or pain. May or may not be a permanent covering, altering the users physique or hiding just beneath the surface. 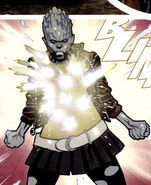 Bling!(Marvel)
Add a photo to this gallery
Retrieved from "https://powerlisting.fandom.com/wiki/Dermal_Armor?oldid=28923"
Community content is available under CC-BY-SA unless otherwise noted.