Walpurgisnacht (Puella Magi Madoka Magica) is one of the most powerful witches in creation and an embodiment of despair.

Become the embodiment of despair.

"It is said that scattered through Despair's domain are a multitude of tiny windows, hanging in the void. Each window looks out onto a different scene, being, in our world, a mirror. Sometimes you will look into a mirror and feel the eyes of Despair upon you, feel her hook catch and snag on your heart."
― Sandman #21: "Season of Mists", preludium

The ability to become the embodiment of despair. Variation of Emotional Energy Manipulation and Emotion Embodiment. Opposite of Hope Embodiment.

Users become the living embodiment of despair and gain the ability to feed off of the despair of everyone and everything, including themselves. Users can convert despair into energy and use it as a full source to extend their own life span or as a weapon. They may never age and may be immune to death unless certain conditions are met.

Nnoitra Gilga (Bleach) was the Espada that represents Despair.

Kōga Kuchiki (Bleach) came to enjoy despair, claiming it unleashes his true power by making him realize there are no ideals in the world, and killing innocent denizens as a message of hopelessness.

Apocalymon (Digimon) is the embodiment of all despair of all Digimon that have failed to evolve and died out.

Black Alice (Project ARMS) is the representation of despair and hatred born from Alice. 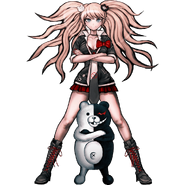 Junko Enoshima (Danganronpa: Trigger Happy Havoc) lives to bring as much despair to everyone, herself included.
Community content is available under CC-BY-SA unless otherwise noted.
Advertisement