Even after being impaled and having his heart removed, Shinta Tagamori (Gan-Kon) is able to fight at full strength right after undergoing surgery, even when he shouldn't be able to move because of blood loss.

Fight at full strength after nearly being killed.

"I could crush your body, I could smash your bones, but I could NEVER break your spirit."
― Rasslor (Dexter's Laboratory)

"Storms! Highprince, you're all scars under here! How many times have you been wounded in the shoulder?"
"Can't Remember."
"How can you still use your arm?"
"Training and practice."
"That's not how it works!"
― Dalinar and the Surgeon (Words of Radiance)

The power to fight with full strength despite being near death. Sub-power of Enhanced Survivability. Not to be confused with Lifeless Continuation or Survival Empowerment.

User can fight and defend oneself at full strength even after being nearly killed or near death, allowing them to fight even when they shouldn't be able to (such as crippling/massive or mortal injuries, missing limbs, missing/removed organs, major blood loss, etc.).

Unlike Survival Empowerment, the user is already fighting at full strength the entire time rather than getting stronger after being near death.

Despite his old age and failing health, Whitebeard (One Piece) was able to continue fighting with no less might after suffering over 400 grievous injuries, including a hole burned through his chest and having half of his face burned off until he died standing. 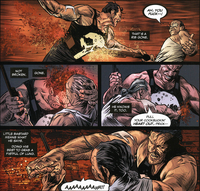 Even after losing a part of his ribcage and several internal organs, The Punisher (Marvel Comics) is able to continue fighting at full strength despite the fact he shouldn't be able to move, let alone still be alive.

When push comes to shove, Spider-Man (Marvel Comics) has displayed insane feats of strength when pushed to his limits to save someone's life such as lifting metal rubbles that weighs 130 tons to save Aunt May's life.

After getting shot through the right side of his lower back, Thomas (Maze Runner; Death Cure) used his determination to immensely throw a microscope hard enough to free Cranks from a containment cell.

After being infected with the Joker's Titan poisoning, Batman (Batman: Arkham) was able to continue fighting at full strength despite becoming so sick from said poisoning that he coughed up blood and suffered a near-death experience.
Community content is available under CC-BY-SA unless otherwise noted.
Advertisement