Users possess an arsenal of highly advanced technological devices, which they can use to achieve a wide variety of incredible effects, often comparable to those of supernatural abilities and magical items. 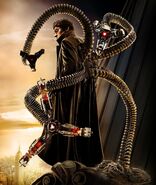 Doc Ock, (Marvel Comics) with his robot tentacles, can preform amazing feats.
Add a photo to this gallery
Retrieved from "https://powerlisting.fandom.com/wiki/Device_Usage?oldid=1282029"
Community content is available under CC-BY-SA unless otherwise noted.