Kojō Akatsuki (Strike the Blood) via using one of his Familiars, Aries.

Hosenki (Inuyasha) can control the diamond composing his body.

Diancie (Pokémon) can instantly create diamonds by compressing the carbon in the air, which can then be used to defend itself. 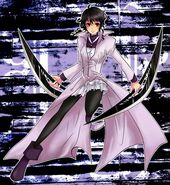 Jita Phrygianos (The Qwaser of Stigmata) can control carbon, creating diamonds such as wires and bladed weapons.

Diamondhead (Ben 10 Series)
Add a photo to this gallery
Retrieved from "https://powerlisting.fandom.com/wiki/Diamond_Manipulation?oldid=1674998"
Community content is available under CC-BY-SA unless otherwise noted.