Omnimon (Digimon Adventure) is the digital evolution of WarGreymon and MetalGarurumon when they downloaded the data of numerous e-mail during the battle with Diaboromon.

digitally evolve into a powered state.

The ability to evolve by downloading various data in cyberspace. Variation of Evolution.

The user absorbs data in digital cyber space in order to develop and become a stronger being. The user's appearance is sometimes altered and their attributes are enhanced, allowing them to become stronger than their previous form.

Some users may be able to gain new abilities such as:

Magnamon (Digimon: Adventure02) is digital evolved form of Veemon when golden armor digivolves with the Digi-Egg of Miracles.

Gallantmon (Digimon: Tamers) is the digital evolution when Guilmon biomerged with Takato during the battle with Beelzemon.

Koji Minamoto (Digimon Frontier) is able to Spirit Digivolve with the Digispirit of Light into Lobomon. 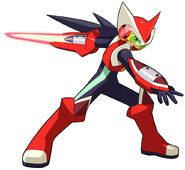 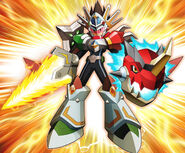 Biometals (Megaman ZX series) are miniature devices that stores the data (eg. personality or battle data) of a Reploid or human and is able to form armor around the user via their M.E.G.A System to allow the user to Megamerge. 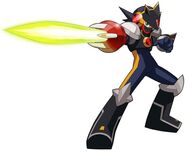 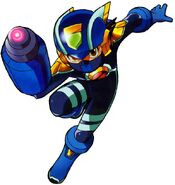 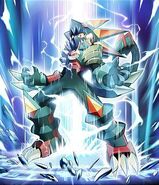 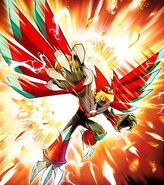 Using Shining Digivolution, Calumon (Digimon Tamers) digivolves any Digimon in his vicinity to the Mega level.