The ability to create dimensions. Sub-power of Dimensional Manipulation. Variation of Creation. Opposite to Dimension Destruction.

The user can create dimensions and nearly anything within the dimension (objects, creatures, etc.) and travel to them by creating a portal or just by wishing. They can bring other objects and organisms to their dimensions, although they must use more energy and concentration to do so. One might make a dimension where only they are invisible, and thus hide whenever being hunted by others. 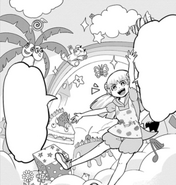 Valac Clara (Mairimashita! Iruma-Kun) can combine her Summon and Raim's Illusion Magic to create a dimensional place where she considers this as an integration with fun.

... an entire dimension, which was used to evacuate people to Vacuo.
Português do Brasil
Community content is available under CC-BY-SA unless otherwise noted.
Advertisement