"I may be beaten, but I won't go down that easily. I'll take you and both worlds with me.[...] You still haven't seen my ultimate attack. TOTAL ANNIHILATION!"
― Apocalymon (Digimon Adventure)

The power to destroy entire dimensions. Sub-power of Dimensional Manipulation. Variation of Destruction. Opposite to Dimension Creation.

The user can destroy entire dimensions.

In the form of Master Mogul, Mammoth Mogul (Archie's Sonic the Hedgehog) could destroy entire dimensions with his bare hands.

When used in the proper ritual, Dawn Summers' (Buffy the Vampire Slayer) blood tears down all existing dimensional barriers, destroying them all.

Apocalymon's (Digimon Adventure) ultimate attack, Total Annihilation, is powerful enough to destroy both the real world and the Digital World.

Endless (Rave Master) is the entity destined to destroy the current dimension.

The Void (Super Paper Mario) is an interdimensional black hole that wields the power to destroy all dimensions. 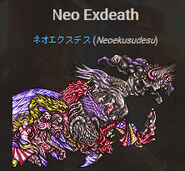 After completing his transformation Neo-Exdeath (Final Fantasy V) is able to bring dimensions and even all existence into nothing.