The ability to use magic related to dimensions. Form of Magic. Variation of Dimensional Manipulation.

The user is able to perform a type of magic that can control geometric settings (dimensions) and/or manipulate the amount of space in a particular object/place. 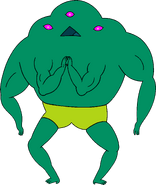 Dimension Wizard, as his name says, can create any dimensional portals using Magic.
Add a photo to this gallery
Retrieved from "https://powerlisting.fandom.com/wiki/Dimension_Magic?oldid=1694973"
Community content is available under CC-BY-SA unless otherwise noted.