The Gingerification Gun (South Park) allows Stan to send the evil counterparts back to their universe with each shot.

The ability to use dimension-based abilities by using ranged weapons as conduits. Variation of Scientific Weaponry and Dimensional Weaponry.

The user can either use various ranged weaponry such as slingshots, bows, guns, cannons etc, as a conduit for dimensionally-based forces or impose those effects on ranged weapons to enhance them. 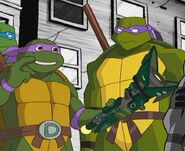 The 1988 and 2003 Donatellos (Turtles Forever) created a Portal Stick for dimensional travel.
Add a photo to this gallery
Retrieved from "https://powerlisting.fandom.com/wiki/Dimensional_Artillery?oldid=1501513"
Community content is available under CC-BY-SA unless otherwise noted.