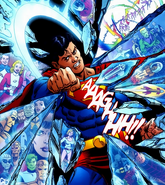 Ludger Kresnik (Tales of Xillia 2) is able to create distortions in the various fractured dimensions using his Chromatus form.
Add a photo to this gallery
Retrieved from "https://powerlisting.fandom.com/wiki/Dimensional_Distortion?oldid=1063018"
Community content is available under CC-BY-SA unless otherwise noted.