Due to his exposure to Crisis Energies; Paradox (DC Comics) had hideously mutated into a pandimensional menace whom can consume and rewrite space/time and reality as a consequence.

Have a dimensional based mutate physiology.

The power to undergo mutation due to dimensional exposure which alters the physiology. Combination of Mutant Physiology and Dimensional Manipulation/Space-Time Manipulation.

The user can undergo mutation to receive heightened abilities and mutated physiology through a dimensional/spatio-temporal source that may cause the user to change drastically either physically, mentally or spiritually. The user may have received various powers over time depending on what kind of power changed them and the nature of higher and/or lower dimensional covalance. 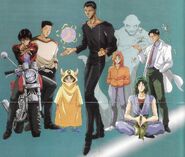 The Sensui Seven (Yu Yu Hakusho) gained their powers due to the dimensional distorting effects of the demon world tunnel.
Add a photo to this gallery
Retrieved from "https://powerlisting.fandom.com/wiki/Dimensional_Mutation?oldid=1694273"
Community content is available under CC-BY-SA unless otherwise noted.