Ramona Flowers (Scott Pilgrim) pulling a hammer several times larger than her bag out of it.

The user can put items/beings into a separate dimension for safe keeping and can summon them back with relative ease.

There are various different methods of "Pocketing": have holes or areas on the body that "suck" objects in. "Bag of Tricks" or "Magic satchel" to hold infinite amounts of objects inside. "Floating" portal or simply reach behind/in anything and pull out the wanted item. Even "Trade In/Out" for any items that they have right now and the items that they want from their dimension, ex. trading a pistol for a shotgun or one's clothing for a new tier set. 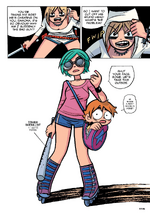 Spot (Marvel Comics) can store many things in his dimension. 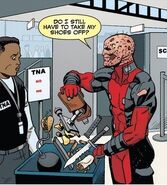 Deadpool (Marvel Comics) can pull weapons out of nowhere with his magic satchel.

Wander's (Wander Over Yonder) hat holds an endless supply of useful items and doubles as a makeshift sleeping bag.
Add a photo to this gallery

Requip (Fairy Tail) users can trade in and out items from another dimension. 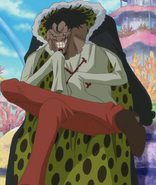 ...and stored a cell phone within his face.

The inside of Kiyoshi Mitarai's (Yu Yu Hakusho) water is a separate dimension, preventing almost anything from piercing it.
Add a photo to this gallery

Han Jee-Han (The Gamer), can store anything into his 'inventory' and can summon them.

Niffler (Harry Potter/Fantastic Beasts)
The Skulls.jpg
The Parasite Unit/Skulls (Metal Gear Solid V: The Phantom Pain) are able to pull weapons such as machine guns out of nowhere.

The Sack of the All-Death (SCP Foundation) is a sack SCP-1440 won from the All-Death capable of holding and imprisoning anything inside it, including storms, city-wide fires, otherworldly monsters, and even the All-Death itself.
Add a photo to this gallery
Retrieved from "https://powerlisting.fandom.com/wiki/Dimensional_Storage?oldid=1332681"
Community content is available under CC-BY-SA unless otherwise noted.