The power to manipulate dinosaurs. Variation of Reptile Manipulation and Prehistoric Animal Manipulation.

The user can create, shape and manipulate Dinosaurs. Weaker users can control them to do their bidding, like helping them during situations, using them against foes, using them to see locations and get information about a particular place, using them for battle, and using them for spying on others. User can also understand or communicate with them, creating and strengthening friendships. 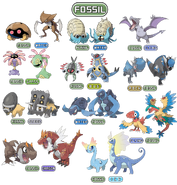 Fossil Pokémon (Pokémon) can be revived from their fossils and trained by Pokemon Trainers.
Add a photo to this gallery
Retrieved from "https://powerlisting.fandom.com/wiki/Dinosaur_Manipulation?oldid=1691652"
Community content is available under CC-BY-SA unless otherwise noted.