Wonderweiss Margela (Bleach) has sacrificed all his intelligence and mental capacity in exchange for being able to seal the immense fire based powers of Ryūjin Jakka. 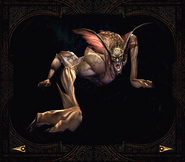 After being blinded by radioactive waste, Matt Murdock/Daredevil (Marvel Comics) developed superhuman senses and a radar sense to compensate.

After being blinded by acidic spit, Peter Parker/Spider-Man (Marvel Comics) uses his spider-sense to detect and fight the Vulture.

Neo's (The Matrix) eyes were damaged during a fight with Smith, but...

Fujitora (One Piece) has extraordinary mastery of Kenbunshoku/Observation Haki, which can easily compensate for his blindness. 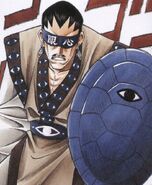 Though blind, the Rat King (Teenage Mutant Ninja Turtles 2012) compensates by being able to control rats and see through their eyes.
Add a photo to this gallery
Retrieved from "https://powerlisting.fandom.com/wiki/Disability_Compensation?oldid=1284556"
Community content is available under CC-BY-SA unless otherwise noted.
FandomShop Newsletter Join Fan Lab