Separate an object or living being into pieces.

The power to separate an object, energy, or person into multiple pieces. Opposite to Reforming.

Renji's (Bleach) Bankai Hihiō Zabimaru can be separated and then rejoined at any moment. 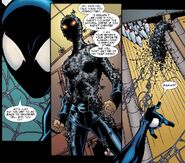 Ero, The Other (Marvel Comics)

Buggy (One Piece) can disassemble himself thanks to the Bara Bara no Mi.

Very Good (One Piece) disassemble himself into floating orbs due to his Beri Beri no Mi.

By using his ROOM technique, Trafalgar Water D. Law (One Piece) creates a spherical space around his targets, in which he can manipulate anything he wants in a variety of ways.

Swarm (Skylander Giant) can disassemble into a... Swarm of Bees. 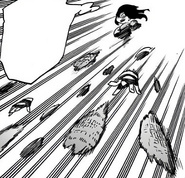 ジョジョ Arrivederci! 『HD』
Add a photo to this gallery
Retrieved from "https://powerlisting.fandom.com/wiki/Disassembly?oldid=1512748"
Community content is available under CC-BY-SA unless otherwise noted.