An unstable Stand, Purple Haze's (JoJo's Bizarre Adventure Part V/5: Golden Wind/Vento Aureo) knuckles contain flesh-eating virus in each of the three bulbs on each of its hands.

The power to generate diseases and viruses. Sub-power of Disease Manipulation. Variation of Organic Generation. Opposite to Antibody Generation. Not to be confused with Disease Inducement.

The user can generate diseases and viruses, including mixing illnesses together or creating completely new ones, whether by drawing them from already existing sources or by manifesting them anywhere they want.

Mary (Fairy Tail) can use Anomaly Magic to create viruses with different effects such as dedication and brain damage. 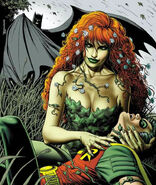 Pestilence (Supernatural) is capable of inducing any disease into humans instantly.

Catagion (Valkyrie Crusade) generates and spreads the felinavirus, a virus that turn others into cats and cat-hybrids, the virus being powerful enough to affect even supernatural entities, such as demons.
Português do Brasil
Community content is available under CC-BY-SA unless otherwise noted.
Advertisement