Like the other Skaven of Clan Pestilens (Warhammer), the Plague Monks are adept in using their Skaven Magic to spread the diseases of their god, the Great Horned Rat.

The power to use disease-related magic. Form of Magic.

The user is able to use a form of magic that controls diseases and parasites, including pathogens and pestilence. This magic can augment, create, spread, or even weaken and eliminate disease. In the case of some supernatural diseases, the user could even convert the victims into vampires, zombies, or other beings. 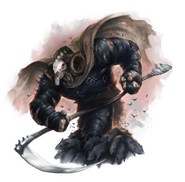 Apollyon (Pathfinder), also known as the Prince of Plagues, is the latest Horseman of Pestilence, one of four Archdaemons.

A Great Unclean One (Warhammer/Warhammer 40K) is a Greater Daemon of Nurgle whose main goal is the spread of the Plague Lord's diseases, doing so through mystical vectors and processes of making them. 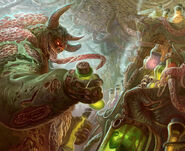 Nurgle (Warhammer/Warhammer 40K) is the Plague Lord, one of the four Chaos Gods who is a master of virulent magic.
Add a photo to this gallery
Retrieved from "https://powerlisting.fandom.com/wiki/Disease_Magic?oldid=825742"
Community content is available under CC-BY-SA unless otherwise noted.