Yamame Kurodani (Touhou) The Bright Net in the Dark Cavern.

The user can create, manipulate, shape, transform, cause/heal, etc. all forms of diseases, including their severity, contagiousness, methods of spreading, etc. They can control the organisms that spread diseases, including germs, bacteria, virus or other pathogens on a cellular level, including bacteriophages, microorganisms (microscopic organisms), retroviruses, cells that abnormally grow to make cancerous tumors and cysts, and pathogens that produce genetic mutations.

Nurgle (Warhammer 40k) also known as the Plague Lord, is the Chaos God of Disease, Decay, and Destruction.

Elena (Los Protegidos) can infect any person she touches. 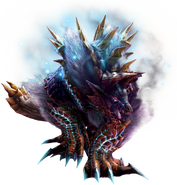 As the Horseman of Pestilence, Pestilence (Supernatural) can create and manipulate any disease.

While infected by Merlin's (The Sword in the Stone) germ transformation, Madam Mim suffered from rapid illness that bed-riddled her.

Germophile (Valkyrie Crusade) can create and manipulate germs.
Add a photo to this gallery
Retrieved from "https://powerlisting.fandom.com/wiki/Disease_Manipulation?oldid=1568117"
Community content is available under CC-BY-SA unless otherwise noted.