"My mouth is a portal into a dark dimension. Even I ignore where it leads. I sent your friend in here… and you are next."
― Vanilla/Cool Ice to Jean Pierre Polnareff (JoJo's Bizarre Adventure Part III Stardust Crusaders)

The power to collapse objects into dust. Not to be confused with Dust Transmutation, Granulation or Ash Transmutation.

The user can cause targets (whether organic or inorganic material) to lose cohesion in various means. Some can make matter fall apart, wipe away their target on a molecular/sub-molecular level or even revert matter into pure energy. Regardless of the means, the target is reduced to either molecular/sub-molecular dust or energy but not absolutely annihilated.

Rowena (Supernatural) use a spell turn three witches into dust.

Cat Noir (Miraculous Ladybug) has the power of "Cataclysm", a bad-luck based superpower that causes whatever he touches… 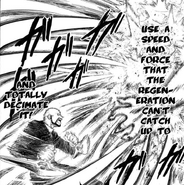 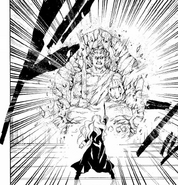 Gambit (Marvel Comics) In his Horsemen form was altered in a way that charging his cards caused whatever they struck to de-materialize. 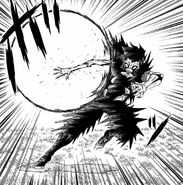 Most of Clear Note’s (Zatch Bell!) spells like Radisu, create annihilative energy to severely weaken, if not, disintegrate anything they touch. 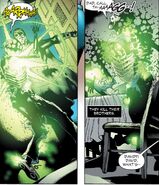 The wielders of the C.A.P.P.E.R. (Team Fortress 2) can fire energy bullets which can disintegrate enemies upon physical death.

With the Infinity Gauntlet, Thanos (Avengers: Infinity War) could snap his fingers and turn half of life into dust.
Add a photo to this gallery

Start a Discussion Discussions about Disintegration