Interact with and isolate from objects, metaphysical, physical or spiritual.

"The first half of life is spent mainly in finding out who we are through seeing ourselves in our interaction with others."
― June Singer

The ability to isolate and/or interact with physical, metaphysical, or spiritual forces or objects. Ultimate application of Interaction Manipulation. Basis of Manipulations in general.

User can isolate and/or interact with any particular subject from the reality around them be it physical, metaphysical, spiritual, etc. and reality will correct itself accordingly, user does not actually warp reality but simply alter its course to a particular effect their results ranging from the mundane to the extraordinary.

It is not so different from a novice artist. The more they work at it, the more skilled they become or in short, they start off with causing minute changes and later, logic defying feats. Practice is the best of all instructors after all.

Note: Considering the accurate applications are based one what the user chooses to interact with and how well they do,it is best if we apply powers potential to their level. 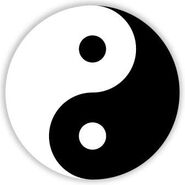 Ying and Yang,the everlasting interaction between two sides of the same coin.

The Sun is what we orbit due to it's size and gives us light, heat, and power for plants.Do you see where this is going?

Yukari Yakumo (Touhou) when we meant a diverse interface, we did not mean a 4th wall breaking one.
Add a photo to this gallery
Retrieved from "https://powerlisting.fandom.com/wiki/Diverse_Interface?oldid=980679"
Community content is available under CC-BY-SA unless otherwise noted.