Possess two or more personas, each capable of separate powers, physical and mental attributes or skills.

"Utsuro. Yoshida Shouyo. I’m both of those and neither at the same time. One that has lived within this body for so long, I’ve forgotten my very name. No, maybe I never had a name to begin with. I was only showered with endless insults and hostility. And the only name I remember is… Devil."
― Utsuro (Gintama)

The power to contain multiple sentient personalities within their mind. Not to be confused with Gestalt Mind.

The user is subjected to these personalities, which can be evoked at variable times. Some personas may be passive or aggressive, some may have different powers.

The separate identity inhabiting the user's hosting body is attributed as a specific symbiote. In most cases this identity can exist for an extensive period of time in which the user may have no prior knowledge of the identity's existence.

It is apparent that while these personas all look out for the original, a factor may present to have intents of over-writing and taking over as the original identity.

Celestialsapiens such as Alien X (Ben 10) all possess three distinct personalities who must agree on anything in a two-thirds majority vote for them to do anything.

The different aspects of Raven's (DC Comics) personality are represented by "Emoticlones" that reside within her mind.

Azrael (DC Comics) has a split personality that actually believes that it is the Biblical Angel of Vengeance.

The Batman of Zur-En-Arrh (DC Comics) is a backup persona stored within Bruce Wayne's mind in the event he is overwhelmed by psychological trauma.

Two-Face (DC Comics) truly lives up to his name.

Two-Face (DC Animated Universe) truly lives up to his name with having two sides of himself, one being a lawyer, the other being a killer.

Coldstone (Gargoyles) possesses the souls and personalities of the three gargoyles whose remains compose his cybernetic body: Othello, Desdemona, and Iago.

Unlike other Sonic continuities, this Super Sonic (Sonic the Comic) is the psychotic, murderous alter ego of Sonic the Hedgehog.

Mike (Total Drama: Revenge of the Island) has multiple egos…

…Chester a grumpy old man when Mike gets frustrated…

…Vito a tough and aggressive Italian when Mike's shirt is off…

…Manitoba Smith an Australian adventurer when Mike puts on a hat…

…Mal is Mike's evil personality sealed within his mind who can shift between his and Mike's minds at his own will.

D.A.V.E. (The Batman) is a computer AI created from the combined brainwaves of several of Batman's enemies.

Every time Roger (American Dad) puts on a disguise, he develops multiple personas.

After eating the heart of her half-brother Lord Drago, Vampirella (Vampirella) temporarily housed his mind in her subconscious.
Add a photo to this gallery

As the result of the merger of numerous Hollows, Gillians (Bleach) are mostly mindless as the numerous personalities inside of them constantly fight for control.

Yue's (Cardcaptor Sakura) false form, Yukito Tsukishiro, has his own identity and personality.

Launch (Dragon Ball) constantly shifts between a kind-hearted, naive persona and a short-tempered, trigger-happy one whenever she sneezes.

Utsuro (Gintama) developed countless multiple personalities to overcome the endless pain of immortality, one such is Yoshida Shoyo, though he ultimately killed the rest of them and resurfaced.

Sakura Haruno's (Naruto) hidden thoughts are frequently expressed by her "Inner Sakura," who is at times shown to be a second personality.

Cavendish (One Piece) possesses a dual personality, Hakuba, who is ruthless in slashing down everyone in range whenever Cavendish falls asleep.

Moka Akashiya (Rosario + Vampire) has two different personalities; her original haughty one (Inner Moka), and an artificial one created from her mother's rosary (Outer Moka).

Sailor Saturn (Sailor Moon) possesses both the souls of herself and Mistress Nine. 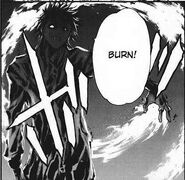 Aoi Kuchiba (The Qwaser of Stigmata) was cursed with her twin brother, Yū's personality when he accidentally killed him. 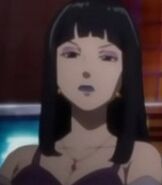 ...who's dominance of Kenshin's mind is signified by Kenshin's eyes turning golden.

Sensui (YuYu Hakusho) has seven personalities, one counting his own and six others.

Alice (Bakugan) with her mask can take on her altered ego, Masquerade. Not only her looks and voice (and probably gender) has changed but Masquerade's personality is the complete opposite of Alice's. 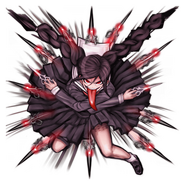 Touko Fukawa (Dangan Ronpa) mostly unwillingly switches to her murderous alternate personality, Genocider Syo, and back through fainting or sneezing.

Zofis implanted a strong darkness inside Koko’s (Zatch Bell!) heart in order to make an ideal partner. By infusing the darkness with Koko’s hidden pain and jealousy, Zofis created a separate personality who enjoyed hurting others as much as he did. Zofis used this evil Koko as a partner while keeping her true, kindhearted side locked away.

Kolulu (Zatch Bell!) has a separate personality inside her spellbook. Whenever Kolulu’s bookkeeper Lori reads the spell Zeruku Kolulu’s sadistic side is released.

Diana (Marchen Awakens Romance) acquired a sinister and heartless personality because of the Chess Pieces’ king’s mind control. Unknown to everyone, even herself, Diana’s true kindhearted self is still locked away.

Under the effects of the Joker infection and Scarecrow's fear toxin, Batman (Batman: Arkham Knight) developed a split personality based on the Joker.

Quincy Sharp (Batman: Arkham) has a murderous split personality that believes itself to be the spirit of Amadeus Arkham. 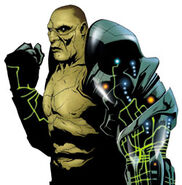 Brigade (Marvel Nemesis: Rise of the Imperfects) constantly struggles with the minds of the one hundred Iraq War soldiers whose corpses make up his body.

Raiden (Metal Gear) has been overtaken by his "Jack the Ripper" persona.

Elisa and Ursula (Metal Gear Solid: Portable Ops) are split personalities who believe themselves to be the other's twin sister. 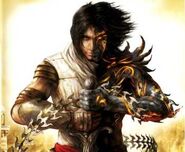 The Prince of Persia (Prince of Persia: The Two Thrones) developed a second personality, the Dark Prince, when he was corrupted by the Sands of Time. 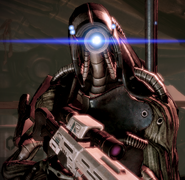 Alfred Ashford (Resident Evil) developed a split personality based on his twin sister Alexia after going insane from loneliness.

Evil Ryu (Street Fighter), Ryu's persona when he has been overtaken by the Satsui no Hado. 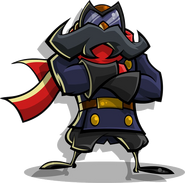 When to pass strict age limits, Penelope (Sly Cooper: Thieves in Time) invented a disguise, giving herself under the alias, Black Baron, a pilot who wins the ACES Flying Competition each year.

The Black Knight (Sly Cooper: Thieves in Time) is another persona Penelope took under while working for Cyrille Le Paradox.

Noire (Fire Emblem Awakening) developed a more brash and violent split personality as a result of being used as a test subject for her mother Tharja's curses.
Add a photo to this gallery

Angel and Angelus (Buffy the Vampire Slayer/Angel) confront one another within Angel's mind.

Glorificus (Buffy the Vampire Slayer) shares a body with Ben, a human doctor. 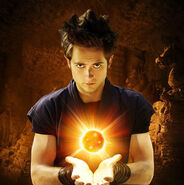 Dr. Jekyll (The Strange Case of Dr. Jekyll and Mr. Hyde) used a potion to manifest his evil impulses into a second personality, Mr. Hyde.

Gina (Heroes) is another one of Niki Sanders' alter egos.

Clark Kent (Smallville) has alternate personalities that surface when exposed to certain kinds of Kryptonite.

Kal (Smallville), Clark's personality that surfaces when exposed to red Kryptonite, represents Clark when he is free of his morals, inhibitions, and social conscience.

Kal-El (Smallville) is a persona of Clark's created when he was brainwashed by Jor-El, which struggled for dominance until Clark emerged victorious.

Lex Luthor (Smallville), while stranded on an island, spoke with a man named Louis Leery, who he discovered was just a figment of his imagination. 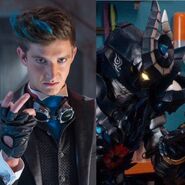 When Heckyl (Power Rangers Dino Charge) runs out of energy, he transforms into Snide.

Niki Sanders (Heroes) possesses multiple personalities, most notably "Jessica," due to child abuse as a kid. 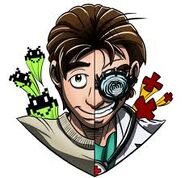 Jackson Jekyll and Holt Hyde (Monster High) are the sons of Dr. Jekyll and Mr. Hyde. When quiet and nerdy Jackson hears loud music, he transforms into Holt, a fun-loving DJ.

...and reverting to Mr. Krupp when he is splashed with water or otherwise wet.

Henry Jekyll and Edward Hyde (The Strange Case of Dr. Jekyll and Mr. Hyde)
Add a photo to this gallery

His name is Diavolo
Add a photo to this gallery
Retrieved from "https://powerlisting.fandom.com/wiki/Divided_Mind?oldid=1446609"
Community content is available under CC-BY-SA unless otherwise noted.