Among Lakota Christians, the mysterious supernatural figure known as the White Buffalo Woman is considered a manifestation of the Virgin Mary.

The user can manipulate divine energy, which is especially harmful to unholy entities such as demons. The energy can be used to trap angels, demons and other divine beings without killing them outright. The color of the energy itself can vary.

Divine energy may have abilities such as summoning spirits of the deceased back to the world of living. High level users could gain the ability of Resurrection via Summoning the deceased and/or angels from Heaven. 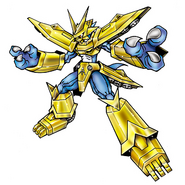