The power to infuse divine power into objects (usually a weapon), beings or powers. Sub-power of Divine Attacks. Variation of Infusion. Opposite of Demonic Infusion. Not to be confused with Benefic Infusion or Transcendent Infusion.

The user can infuse objects (usually a weapon), beings or powers with divine power, empowering and energizing them and allowing the user to manipulate their qualities and efficiency. The objects gain various divine powers, such as purifying their surroundings, minds or targets, releasing divine energies in various ways, etc.

Miguel (Chrono Cross) infusing a blade with divine energy to form the HolyDragSwd.

Kratos (God of War) wielding the Blade of Olympus, which he has infused with all of his godly power.

Link (The Legend of Zelda) infuses his sword with divine power and unleashes it as the Skyward Strike. 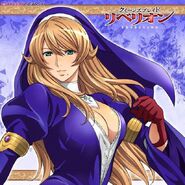 Sigui (Queen's Blade: Rebellion) like Melpha (though Melpha is more powerful due to being more experienced) can utilize the Holy Poses to channel divine energy through her Staff of Holy Fire to purify, heal, even instill fear and other effects into her targets or anyone she deems a "heretic".
Add a photo to this gallery
Retrieved from "https://powerlisting.fandom.com/wiki/Divine_Infusion?oldid=1501638"
Community content is available under CC-BY-SA unless otherwise noted.