The ability to use divine magic. Form of Magic. Combination of Magic and Divine Force Manipulation. Divine variation of Mythic Magic. Opposite of Demonic Magic. Not to be confused with Transcendent Magic or Christian Mysticism.

The user is capable of using divine magic; a sanctified and sacred form of magic that uses holy forces to mystically use divine powers to achieve impossible feats such as creating, destroying and reconstructing anything in existence, sometimes even to warp reality. This type of magic is usually used by a transcendent/divine being or those related to them such as gods, demigods, angels, etc.

After drinking from the Holy Grail, Merlin (Once Upon a Time) gained immortality and a near-divine level of magic. 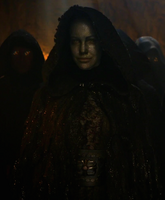 Nimue (Once Upon a Time) gained the same level of magic as Merlin after drinking from the Holy Grail before corrupting it by using it to take a life. 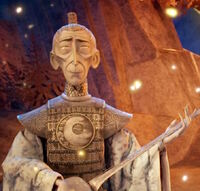 The Moon King (Kubo and the Two Strings) is a celestial being with access to great and powerful magic. 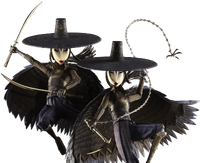 The Sisters (Kubo and the Two Strings) are powerful daughters of the Moon King and are adept in great, celestial magic.

Sariatu (Kubo and the Two Strings), as a daughter to the Moon King, has access to great, celestial magic...

...abilities that her son Kubo inherited. 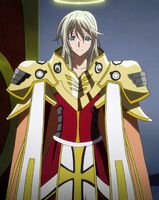 Archangel Michael (Highschool DxD) is a master of holy and angelic magic.

The Holy Grail (Once Upon a Time) is an ancient cup that if successfully drank from, would grant a person divine magical powers. 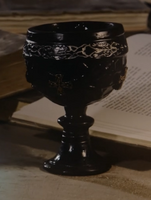 The Dark Grail (Once Upon a Time) is the opposite counterpart of the Holy Grail and can be used to destroy all magic.

The Olympian Crystal (Once Upon a Time) is one of the most powerful weapons in existence, capable of destroying Gods.
Português do Brasil
Community content is available under CC-BY-SA unless otherwise noted.
Advertisement