As he remains God's chosen one despite having become a vampire, Gabriel Belmont/Dracula (Castlevania: Lords of Shadow) is immune to the divine and holy magic that would typically harm those of his kind.

Be immune to divine powers.

The ability to be immune to certain or all divine powers and their effects. Sub-power of Divine Force Manipulation. Variation of Power Immunity. Opposite to Demonic Power Immunity.

User is immune to all or certain divine powers and effects, making them can withstand to angelic power and go toe-to-toe with deities. 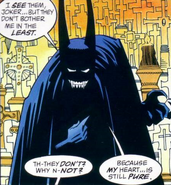 The Batman of Earth-43 (DC Comics) was immune to holy artifacts as long as he abstained from human blood...

...but lost that advantage after draining the Joker of his blood in an act of predatory rage.
Add a photo to this gallery
Retrieved from "https://powerlisting.fandom.com/wiki/Divine_Power_Immunity?oldid=1655617"
Community content is available under CC-BY-SA unless otherwise noted.