The ability to see reality from the eyes of a deities or divine, cosmic entity. Sub-power of Divine Sense. Advanced variation of Divination and Enhanced Vision. 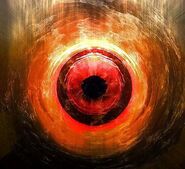 Ocularis Infernum (Eye of Hell) (Thirteen Ghosts) enables users to gain divine sight to see the past, present and future on the mortal realm, heaven and hell.
Add a photo to this gallery
Retrieved from "https://powerlisting.fandom.com/wiki/Divine_Sight?oldid=1634350"
Community content is available under CC-BY-SA unless otherwise noted.